Lets start with the Formula Fords, In qualifying a car with the 1600's pour oil half way round the circuit so it was red flagged and the oil was cleared up. Unfortunately this did not help Neil as suffering for lack of track time due to no testing the day before he only managed to qualify 16th. Max and Callum also struggled but managed to qualify 2nd and 3rd, but following legality checks the car that was on pole was sent to the back of the grid, this promoted Callum to pole and Max to second to line up for the start. 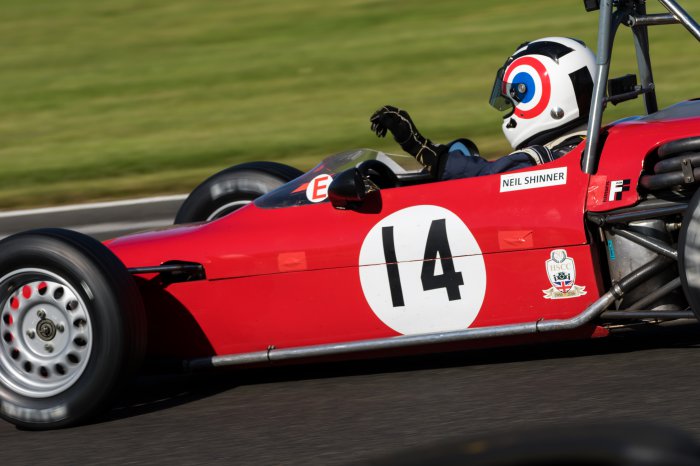 In the race all three drivers got off to a great start with Neil making up a few places at the start, with Max and Callum leading the pack away. Neil had a race long battle but only managed to gain one place by the time the flag fell finishing 15th. Callum and Max put a stunning pace down in the first 4 laps and managed to pull a gap of 4.5 seconds which is where it stayed for the remainder of the race, unknown to Callum but his chassis had split at the back but Max could see this and didn't push him so they could finish together with Callum First and Max second. Great Result.

Max in one of the oldest cars on the grid struggled in qualifying only managing to get 9th with a time of 1:32.97 , after this they Mike Catlow who runs the car managed to get some more traction out of the car and sent Max on his way in race one.

Race one got underway with Max climbing the field quickly and getting up to 4th and having a great battle with the legendary Ian Flux, what a site a full grid of Classic formula 3 cars in there original colours and Max in a car older than the rest running at the front fighting for the win. it was like watching a very fast Formula Ford race. By the end Max finished 4th with a time of 1:32.27 and a smile on his face.

Started with Max attacking from the word go, and going round the outside of Ian Flux at paddock hill bend which is the first corner at Brands Hatch. He then passed race one winner in the same place and started his chase on the leader, unfortunately the chequered flag came out before spectators managed to see the epic battle for the lead. Max Finished second with a Lap Time of 1:32.2 again with a grin from ear to ear.

Unfortunately the wrong gearing was put in the car before we got to the meeting so Callum just did his 3 Laps to qualify and pulled in not to risk the car. The time he did only qualified him 15th which meant a lot of work for the race as the leaders were 5.1 seconds up the road.

The race was very entertaining, it was like going back in time to watch them race in period in the early 1960's. Callum got off to a good start but as he was climbing the field there was an accident which meant there was a safety car which in turn cut time down so he had less time to get as far as he could up the field. He ended up finishing 6th which wasn't what we were hoping for but was good non the less. Thanks to John Sykes for lending such a successful and beautiful car.

The Elva didn't stand a chance of winning at this circuit as it didn't have the tyres or the handling compared to the B8 Chevrons, or the Shelby Daytona. In qualifying they struggled on tyres so only managed to qualify 5th, for the race new tyres were fitted to Bruce Bartells Elva.

Unfortunately the car didn't want to go on circuit as just before the race the radiator burst, but lucky thanks to WDK Motorsport who run the Elva the car was fixed and ready for Max to start the race. On the start Max Vaulted of the line managing to grab second place into the first corner which was lucky as there was an accident right behind him. Max kept the car in 2nd throughout his stint and put some great times on the board, in the pit stop we managed to get overtaken and dropped down to 8th. After a few laps Callum managed to get the car to 4th just behind Simon Hadfield in the Shelby Daytona Cobra which had at least double the power but did not corner as well. Callum and Simon had a huge battle chaging places at every straight and every corner when the two leaders crashed into each other which promoted them to 1st and second, this was unknown to Callum. The team didn't give Callum a pit board as the battle between him and Simon was so close they didn't want to distract him. As Callum approached the flag Jonny from WDK put the pit board over the pit wall saying P1. When Callum pulled in he complained of a brake problem when looked at the front left calliper had decided to let go and stop working. What a Result for the two lads and thanks to Bruce for giving them both the opportunity to drive such a special car.

Ups and Downs but mostly Ups.